Today Egon von Greyerz told King World News it is now only a matter of time before the Silver Maginot Line falls, just like the Gold Maginot Line fell, and the price of silver is going to explode higher after it is broken.

June 28 (King World News) – Egon von Greyerz:  Here is a joint statement from Lagarde and Powell at a secret G7 meeting with all Leaders and Finance Chiefs of the seven nations attending as well as the IMF and BIS:

“The financial system has been on the verge of collapse since September 2019 when we started Repos and QE. And since then it has only got worse. The coronavirus hit us at a time when the banking system was almost down and out.

We had enough problems saving the banks. But now we must save big corporations, small companies, individuals, local municipalities and states, the Federal State and this on top of rescuing a financial system which is deteriorating by the day. The whole system is leaking like a sieve and we are struggling to keep it all afloat.

Fortunately we have printing presses and that helps to keep it all going but only just. Our big fear is that the market will realise that all the money we are printing is worthless. And it is of course but we can’t tell anyone. But if the world wakes up to this one day soon, the financial system could implode in a matter of days. And we would be totally helpless to stop it…”

Sadly, they didn’t actually says this and this meeting never took place, but it should have.

EXPONENTIALLY WORSE THAN 2008 – A BLACK HOLE
And this dear readers is where the world stands today — on the verge of an implosion of the whole financial system. Just a small crack could push the whole system into a black hole. All that is needed is a severe second wave of CV-19 or a bank collapse, triggering an implosion of debt markets and the whole system…

Yes, we know the world was in a similar situation in 2008, but with over $100 trillion more in debt and who knows how many additional $100s of trillions of derivatives plus a world economy disintegrating – it is now exponentially worse from a risk point of view.

We must also remember that bad debts in the financial system are going up by the minute with most borrowers under severe financial pressure. Just look at the chart below how bad debts follow unemployment. The banks haven’t reported this yet but we will see it in the next couple of quarters. 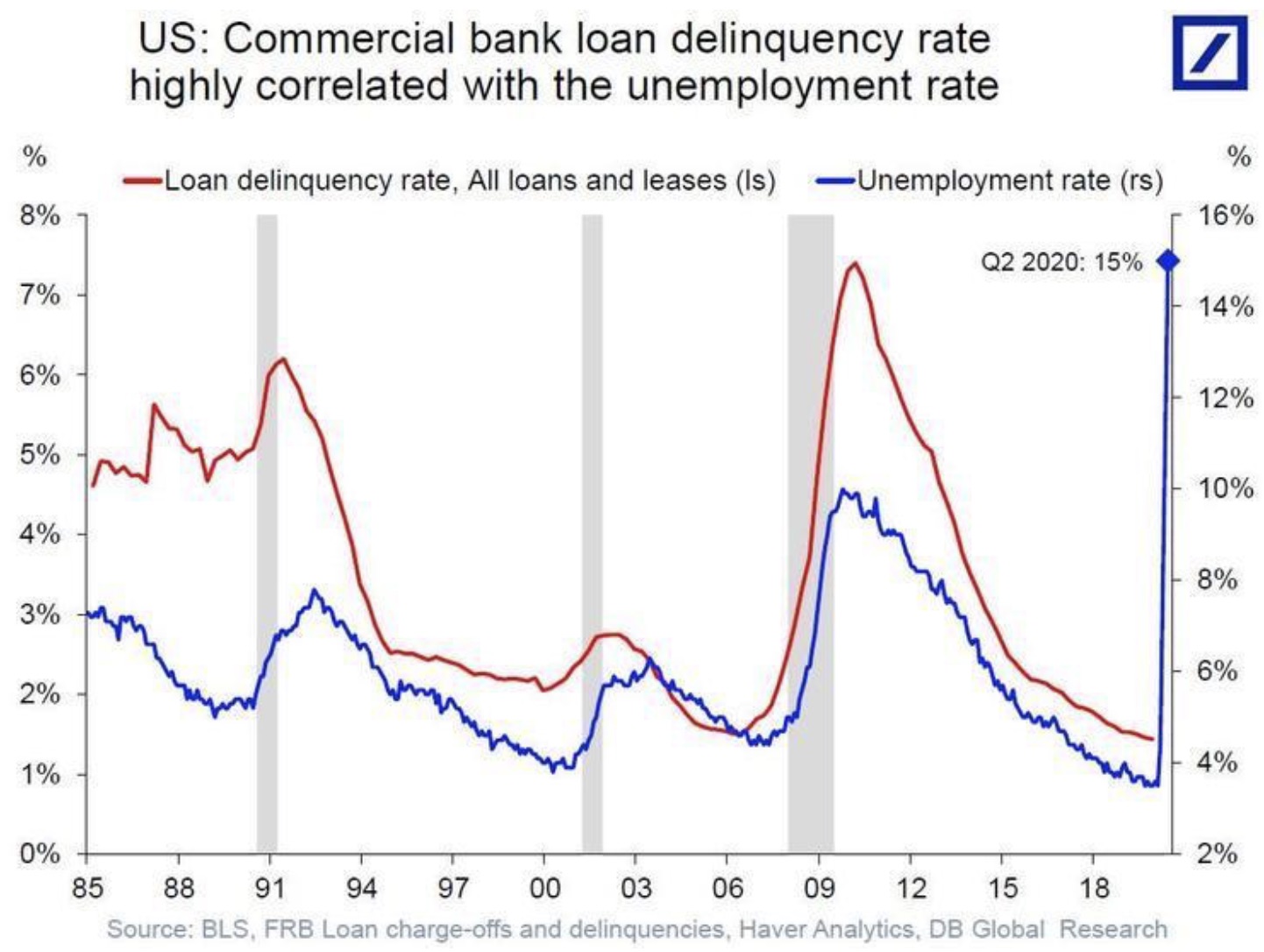 TELLING THE TRUTH IS A REVOLUTIONARY ACT
So why don’t the Fed and ECB chiefs tell the truth? Well, maybe they are, in their own CB Speak.

ECB President Christine Lagarde said the recovery from the coronavirus pandemic will be “restrained” and will change parts of the economy permanently. And Powell recently said: “The path ahead is likely to be challenging. Lives and livelihoods have been lost, and uncertainty looms large.”

So “restrained” and “challenging” is as far as they can stretch without panicking the world. They would obviously never warn bank depositors that their money will soon be gone. This is why people must figure it out themselves. But of course they won’t until it is too late.

LESSONS IN RISK
Most people have never had to worry about risk in the financial system since, until now, they have been saved by the CBs.

With more than 50 years in business you learn a lot of lessons on the way. As a young man, when acquiring my MBA back in 1969 I had to learn everything about Keynesian economics, only understanding much later how wrong it all was. My first job was in commercial lending in a Swiss Bank. Those were the days when the Swiss banking system was run on conservative principles. That was the perfect training for analysing and understanding risk and very different from the massive leverage of today with minimal capital backing.

My real grounding in dealing with risk was at Dixons. At the time it was a small listed UK business which we built up to the UK’s leading consumer electronics retailer and a FTSE 100 company. I was first a green 29 year old Finance Director and a few years later Executive Vice-Chairman. Dixons was founded by a Jewish entrepreneur who was a superb businessman and retailer. It was a steep learning curve. He is now 88 and still as sharp as ever.

One of our principles was to always panic early but in a controlled manner. For example, if there was a substantial downturn in consumer spending, we implemented major cost reductions across the company within a few days. And if we made major acquisitions, we quickly sold off dead or liquid assets to reduce leverage to conservative levels.

By being financially prudent and commercially aggressive, we managed to grow the company fast without taking excessive risks. We survived without pressure both the oil crisis in the early 1970s and the coal miners’ strike which led to having electricity only 3 days a week. The other days we sold televisions with the help of candle lights.

Low leverage and low debt were the key. So, very different to today with massive debts and leverage. And that is why no individual and no company can survive a serious crisis without massive state aid. In recent times, no one has been taught to save or build up a nest egg for a rainy day. When things go well, all the money is spent and when they go badly, you either borrow money or the state has to help. This goes for individuals as well as for big corporations.

DEBTS AND DEFICITS – THE MODERN MANTRA OF FINANCE
With low or zero interest rates and the value of money constantly declining, there is clearly no incentive to save whatsoever. Also, governments and central banks are setting very poor examples.

But how can you expect people to be prudent when their governments and central banks have for decades been running deficits and printing money. Debts and deficits are the mantra of modern finance. But what no one seems to understand is that this mantra has become a chronic disease which is killing the world a lot faster than the coronavirus.

WEIMAR & ZIMBABWE SQUARED IS COMING
The world’s central banks are now in the process of outshining both Weimar and Zimbabwe. Together with governments they have globally printed and borrowed $18 trillion since CV started. And since the Great Financial crisis started in 2006 they have more than doubled global debt from $125 trillion to over $275 trillion, but that is just the beginning.

We talk about billions, trillions and quadrillions as if we understood what it means but nobody really does. It is absolutely impossible to fathom what a trillion is. Let’s start by counting to one trillion. It will take you 32,000 years. And then you would have to count very fast, never hesitate nor make a mistake – nor start from the beginning again. Ok, so the $18T just created globally, how long would that take? Almost 600,000 years. So clearly totally unrealistic and impossible.

FED & ECB QE HAS ZERO VALUE
Whenever this magnitude of money has been manufactured before, like Weimar, it has always been totally worthless. And it is this time too!

This magnitude of debt can never be serviced at a market rate. Only at near Zero or negative rates. It can never be repaid with properly earned money. $18T represents 22% of Global GDP. And since almost all countries have deficits today, there is absolutely ZERO chance that this debt will ever be serviced or repaid in the future. Remember that the US has not had a proper budget surplus since 1960. (Please don’t write to me about the Clinton years. They were fake surpluses as debt continued to increase).

Virtually all the money created by the US government and the Fed in the last 20 years is totally worthless because any money created at will out of thin air is by definition fake. If all that was required to print the $10s of trillions was to press a button and nothing was produced by way of goods or services, then the money has ZERO value. I know I keep stressing the previous point over and over again. This is done so that at least a few people can understand what is likely to happen next and therefore prepare themselves and their financial situation.

So why don’t Powell and Lagarde tell the people that central bank actions are destroying the economy and the value of  the country’s money?

The dollar has lost 86% in this century and the Euro 82%, measured in real money. Real money is of course gold since it represents constant purchasing power and is the only money which has survived in history.

THE JOURNEY TO ZERO FOR FIAT CURRENCIES WON’T BE LONG!

Stocks
There is an ominous disconnect between equity values and profits. As the chart below shows, values have doubled since 2012 with profits stagnant 2012-19. Now in 2020, profits are crashing and stocks will follow. 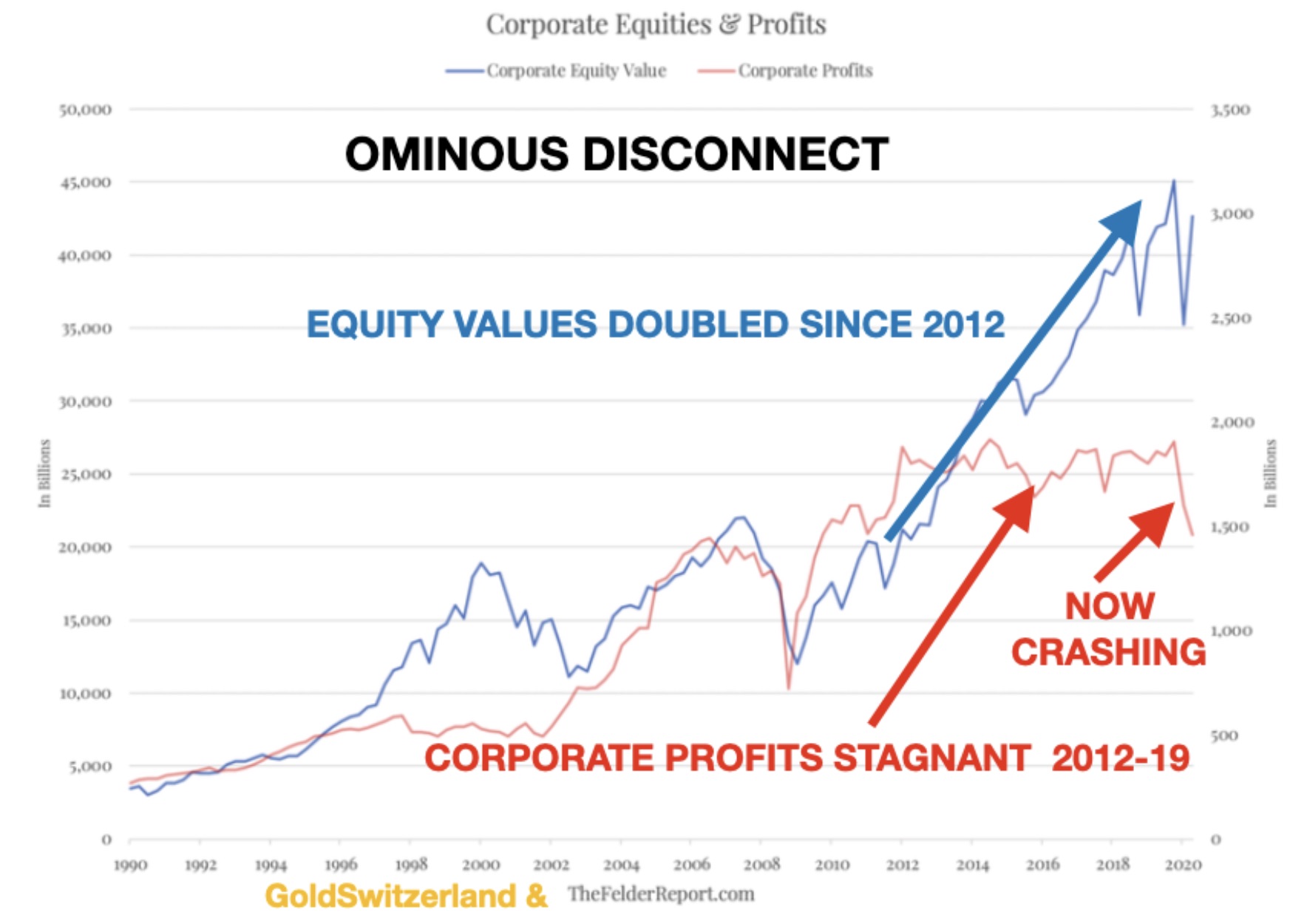 The Dow correction up finished on May 8 and is now resuming the downtrend. All the V recovery optimists are going to get a real shock. The monthly Dow peaked in January 2020 (see chart) and the downtrend was confirmed well before CV started to trouble markets.

I have been saying in the last couple of weeks that a resumption of the stock market downtrend is imminent and it seems clear that imminent is now. Most market participants will be shocked as stocks around the world crash down below the March lows and long term much, much lower.

Gold & Silver
Many have feared that the precious metals will initially fall with stocks but this seems unlikely to be the case. 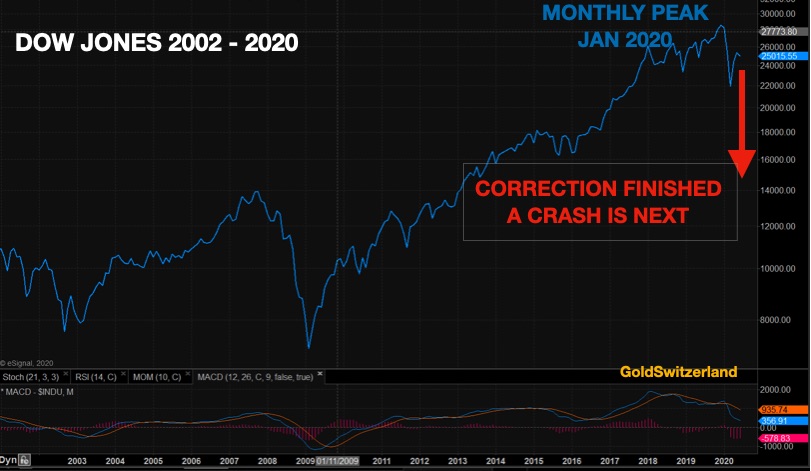 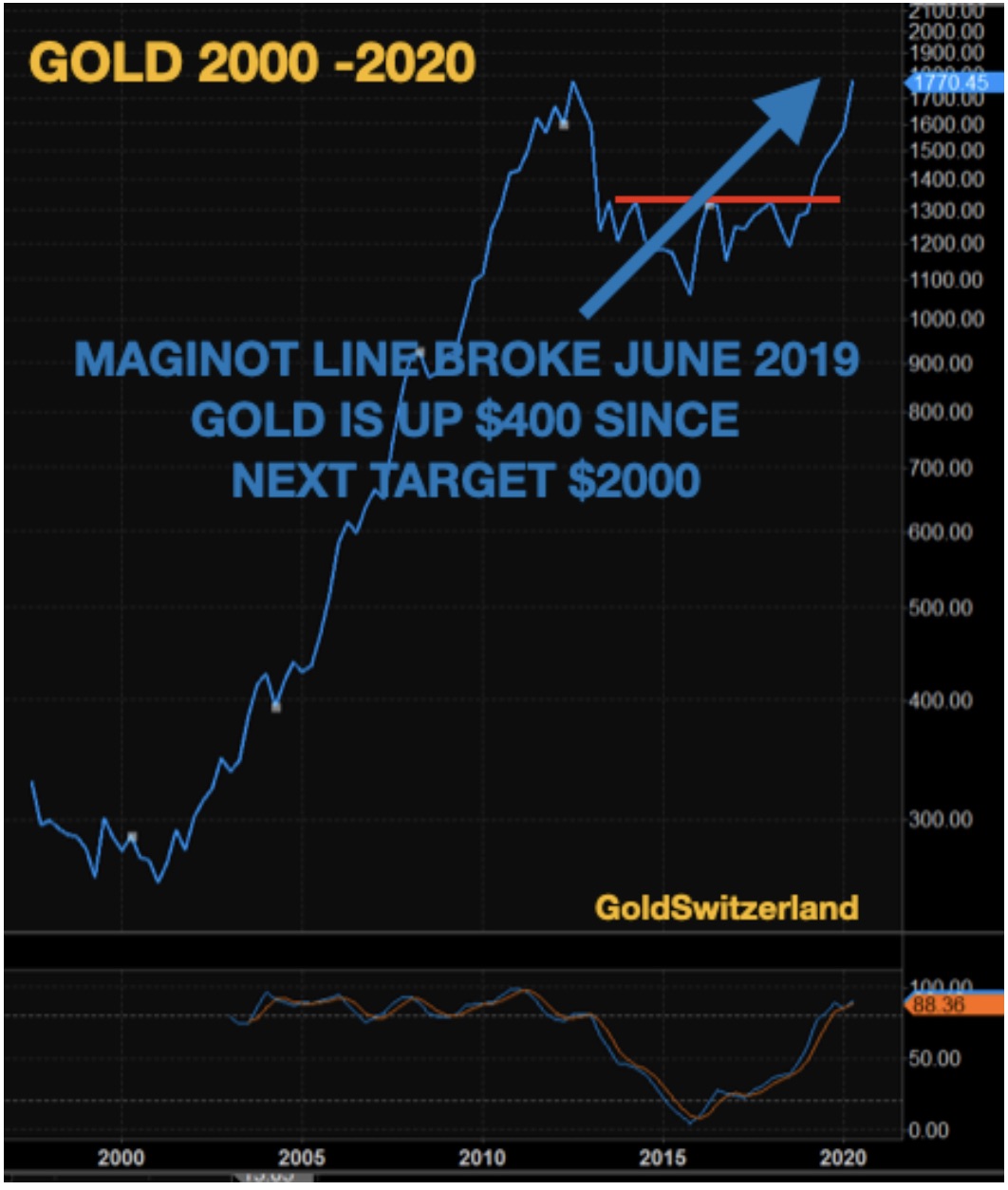 There is a massive fight to hold Silver below the $18 level. It seems the LBMA boys are about to lose that fight and that silver will soon go through the $18 level which it has held below since 2014, with 3 months’ exception in 2016.

This Silver Maginot Line is even more significant than the Gold one as it comes from a much lower level of 64% below the $50 peak.  Once the price of silver breaks the Silver Maginot Line, we are likely to see a silver explosion and a sharp fall in the gold/silver ratio (see chart below). 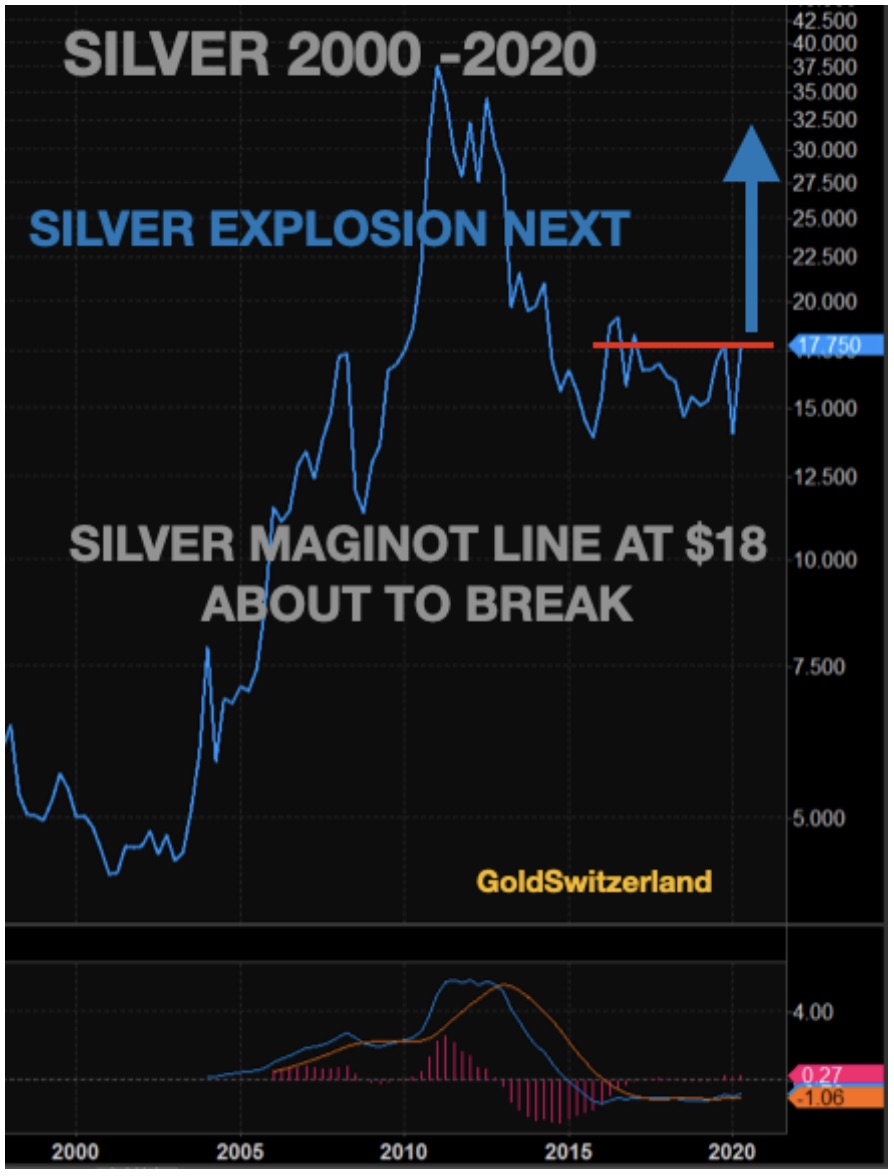 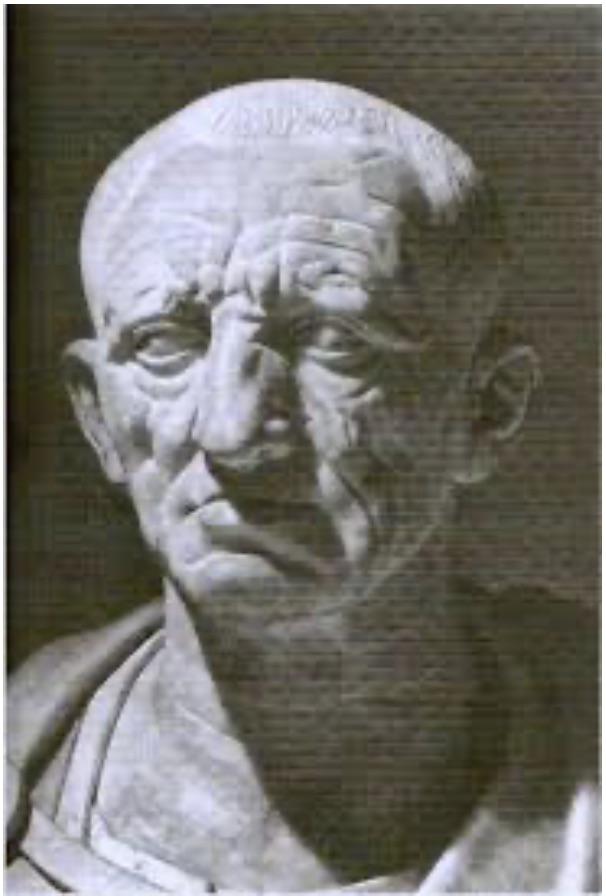 “Furthermore I consider that Carthage must be destroyed” is what Cato the Elder said at the end of every speech he gave in the Roman Senate prior to the 3rd Punic war 149-146 BC. In the end his persistence paid off and Carthage, a Phoenician City in North Africa, was destroyed.

I learnt this phrase in Latin at school and also about Roman history and it has stuck ever since. The reason why I mention this is that I normally finish most my articles that you must hold gold for wealth preservation purposes and not for gains measured in phony paper money which is about to be totally debased.

Hopefully not just my historical understanding of gold but also my passion and persistence will help a few people to avoid ruin in coming years…For those who would like to read more of Egon von Greyerz’s fantastic articles CLICK HERE.